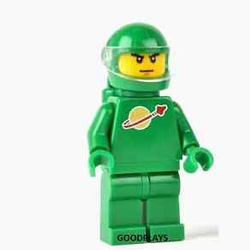 In the year 2940, the F-3 Stingray was built by a private group of asteroid miners. This ship was designed to transport miners to and from meteorites. As you might notice, it has no hull plating. This is because plating is expensive. The Stingray’s owners are paid to destroy asteroids that are headed for earth, as well as to mine for various materials. This ship is powered by a fusion generator. The miners have micro-fusion backpacks that allow them to fire plasma into rocks to dislodge valuables. I hope you like the F-3 Stingray as much as I do.

The Stingray is built in micro scale but also comes with four miners. It is made so that one stud on the ship represents one hundred square studs if the ship was minifig size. I have calculated that if the Stingray was minifig size, it would be five feet long!

A stand for the minifigs

If you have any questions or suggestions, I would appreciate any comments.