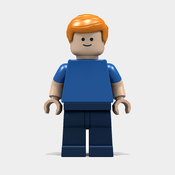 "I owe the Outrider the best. She's brought me home when any other ship would have scattered me across space."

This model is based on the Outrider, a heavily modified YT-2400 light freighter used by the brash smuggler Dash Rendar during the Rebellion Era. I tried to make this model look as much as possible to the MIDI scale Millennium Falcon and the ship featured in the Nintendo 64 videogame, Star Wars: Shadows of the Empire. The complete set features the Outrider, Dash Rendar and Leebo, Dash's repair droid.

This is this model's 2nd run for the 10,000 supporters. Please support and share to make this happen. Critics are welcome.