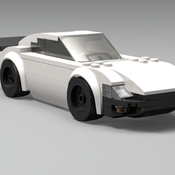 The Nissan Skyline RS Turbo C was derived directly from the iconic  R30 Super Silhouette. It wasn't a champion of its group, but might be the only front engined Group C car in the 80's.I love the race cars of the that era especially the Super Silhouettes,because they inspired many tuning styles around japan, for example the over the top bosozoku and the kaido racers.Thanks to the new Speed Champions parts it was easier to remake it at this scale, with the official livery it would really look the part. I hade to make it a bit wider than other cars in this theme to make the wide body extensions more apparent.