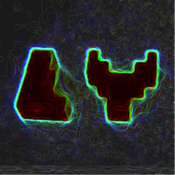 The set would consist of two minifigures; Agent K and Agent J, The Ford LTD Crown Victoria Rocket car and a Monocycle.

A major vehicle in the Men In Black Trilogy. The back of the car is removable and can be swapped between the jet engines and the normal trunk of the car. Complete with the red button, it's a classic.

The Monocycle is just AWESOME in the movies, it is even more amazing in LEGO. What else can i say?

The Minifigures would be Agent K and Agent J each with a reversible head (one side with sunglasses one without), both have a Neuralyzer, one from the first movie (red) and one from the second and third movies (blue), The Series 4 De-atomizer and The Noisy Cricket (pictured separately). The Noisy Cricket is fairly large compared to the Minifigures so it would be hard to make it smaller without creating a new piece.