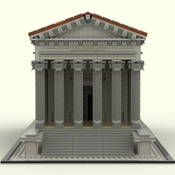 By Dakano
26 comments
What is it ?
The Maison Carée (Square House) is an ancient roman temple located in Nîmes (France). Built exactly two thousand years ago on the Narbonensis province, it is considered to be one of the best preserved roman temples nowadays.
It was originally dedicated in honor of the grandsons of Augustus who died young. It survived the test of time by changing its purpose : a church, a museum...
This beauty of architecture is a living proof of the roman genius, with its flagrant symmetry and simplicity that gives the classic representation of an ancient temple. No wonder it inspired so many other buildings around the world !
Why this building ?
As a ancient roman lover, I visited Nîmes several times before and the Maison Carée was a striking look at my favorite time period. For my first digital Lego build, I wanted a simple start so this temple was a great opportunity. I had a lot of fun thinking about design technics and making it look as cool as possible !
How did you make it ?
I've used Bricklink Studio during two weeks to make this happen. I've put as many details as possible on this simple build.
The oustide is at microfig scale. While less realistic, I've choosed to use several colors to make it more appealing to the eye.
The interior (at a bigger "minifig" scale) recreates what could have been inside, with a statue figurating the imperial cult at the center.
What's next ?
Probably other models from the Ancient Rome ! I'm a fan of the Architecture and Creator series, I will also keep making unique builds.
LEGO parts count : 2718 bricks