Top secret zone - On the way to the Mission with Chris Black! 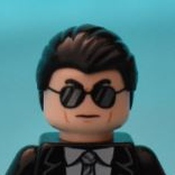 My creation
Hello everybody!
I have the pleasure of presenting you Chris Black, the best secret agent in the world!
Welcome to the secret base of EDA, the Earth Defense Agency. It is in this ultra secret place that Chris Black prepares his missions (photos 1 & 2).
We are in the 60s. L’EDA is a governmental agency which works for the preservation of the Earth against threats, including extraterrestrial. Chris Black is one of its agents. He has already saved the planet several times, that is what makes him the best. He is cool, smiling and he always knows what to do, even in the most delicate situations, like the day when a gigantic oil spill threatened the whole world. His look participates to his legend: always well dressed, hair clipped back and his sunglasses that he never leaves. He does not carry weapons because he hates violence. His only asset: his extraordinary sense of do-it-yourself with which he builds, with only a few Lego bricks, which allows him to get himself out of all dangerous situations.
On this set proposition, we can see Chris in a hangar at base (photo 3), the latter being ahead of its time. His aircraft, unique in the world and designed thanks to alien technology, capable of joining the Earth to the Moon in only 10 minutes, is ready to take off (photo 4)! An agent, who passes behind, pushes a cart containing a barrel filled with the precious fuel allowing this feat (photos 5 & 6a). Before going on a mission, Chris sips his favorite drink which is his guilty pleasure: a natural soda made of kiwi and banana that he had chosen from the organic buffet (photo 7). His behavior exasperates the agent in the mini control tower (photo 6b), but also and especially Murdock, his chief (photo 8).
On the north part, we see the latter at the command post (CP) where his office is located, from which he monitors the solar system. The crisis telephone and the ventilator sever with the high-tech material. In case of attack, the CP is equipped with an armored closing system, which reveals the agency symbol once protected (photo 9). Constantly overwrought, Murdock always has a megaphone, within easy reach, to shout at Chris when he delays the mission (photo 10). Next to him, there is Miss Beauty, the secretary secretly in love of Chris (photo 11). Her little office is in her style: colored, feminine and full offset with the dull colors of the base (photo 12). Always very elegant and a collector of high heels, she never misses a departure of Chris and she always hopes that he will come back healthy and safe. She holds a bouquet of flowers: it is a present from Chris before each departure. Today, they are red roses: a declaration?
On the east part, we can guess an ultra-secure cell where there is Nector, an alien (photo 13), sworn enemy of Chris who wants annihilate Earth! Without his helmet, Nector has no more powers. It is the reason that it is locked in a trunk placed in Murdock’s office (photo 8).
If you want to know more about Chris’ adventures, vote for him!
Vote to Chris Black, the best secret agent in the world, sorry in the universe!
The origin of this creation
I have built the submitted model for the enjoyment of inventing stories and characters, as I did when I was child. In the middle of confinement, I refound this creative pleasure.
A future Lego set?
Functionality, fun and originality are the watchwords of the set subject.
Functional, because this creation is easy to assemble. The base is constituted of three detachable items that use a clip system, offering several possibilities to play. The CP closes easily thanks to its pivoting panels, like the antenna which is foldable (photos 14b & 9). The cell and its barriers open and close (photo 14a).
Fun, because this model owns a projectile launcher aircraft that easily lands in the hangar. The seven figurines, all different from each other, bring a plus to the model.
Original, because maybe a new hero and new characters are born (photo 15)!