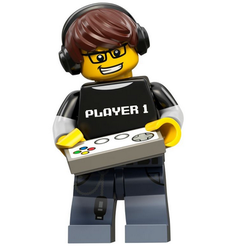 This Deep Space Mech is the Galactic Knights' main choice of vehicle. With it's large thruster on the back it can get from Earth to Pluto in a matter of mere minutes. It also features a no-window cockpit that folds open, with a display screen so the pilot sees everything through the eyes of the mech itself. The Galactic Knights are eager for you to join them with this epic set.