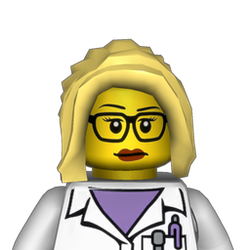 This is the Airport. I already have it uploaded the image on Lego Digital Designer Gallery. It is very big airport building. The building has 4 floors. Floor 1 has 2 shops: a toy store and a restaurant. The toy store is very colourful with a mixture of blue, green, yellow and red. The restaurant has the colour blue. In front of the restaurant is tables and yellow chairs. Floor 2 has the security gates. what makes it cool is that it has a conveyor belt in it. it has yellow rail stands for the lines. One way is the exit and the other way is going to the gate way to the planes. In the exit line it also has conveyor belt for people to collect their bags. In the waiting room where the gates are for the plane. it has yellow chairs and sandy colour type tables. Floor 3 has a office with a computer and a spinning yellow and blue chairs. Floor 4 is the control tower where the people communicate with the pilot. It also has yellow spinning chairs too. On the side of the building is a car with other carts behind. It it has 4 carts. Cart 1 has a space to carry luggage in. Cart 2 has a fuel tank from Octan to fuel up the plane. Finally cart 4 has the stair case for the people to come on and off the plane. I hope you like it.