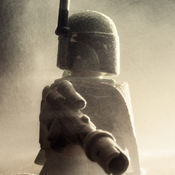 Thank you for viewing my creation!

This is the most vital and revolutionary ship in the entire Star Wars Saga.  If you remember, in Episode III, Revenge of the Sith, Padme Amidala piloted this J-Type Nubian Star Skiff to the Outer Rim system of Mustafar to find Anakin just after his transition to Darth Vader.  The most climactic and revolutionary part of the Saga is the lightsaber battle between Obi-Wan and his former apprentice, Anakin, because it marked the entrance to the original trilogy and explains the extrodinary begining to the original story.  The only reason Obi-Wan took part in this epic battle is because of this ship (he was a stowaway on board during the flight).  Without this ship, Padme would not have died after her childbirth to Luke and Leia (from Anakin's force choke), and the bionic Darth Vader as we know him now would not exist.

This set (intended for play and display) is very similar to, but not exactly like the yacht flown by Padme.  I used the stunningly beautiful design of the original and added a few of my own ideas.