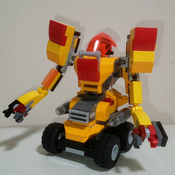 By legoman4530
11 comments
"Oswald the Lucky Rabbit" was created in 1927 by Walt Disney Studios, led by Walt Disney. Subsequent troubles moved Oswald away from Disney and became less popular due to hesitation in work and the rise of the forgotten "Mickey Mouse." However, when Disney repurchased rights to his work from Universal Pictures in 2006, he expanded his reach to include video game appearances, Disneyland parades, and product production. And he has become one of the most popular characters among Disney fans. Next year, 2022 will celebrate his 95th anniversary. This time I thought about this set to commemorate it!
The motif of this set is one of his masterpieces, "Rival Romeos". At the beginning of the movie, Oswald got into the car, sniffed the scent of flowers, and tried to recreate the scene he dreamed of dating. I think that the appearance of Oswald frolicking with a joyful expression is wonderful, even from this era.
A simple and comical car caught in a dusty (or exhaust?) wind. And Oswald. Feel the atmosphere they create. The exhibition stand for this set was created with the DVD "Walt Disney Treasure's Oswald the Lucky Rabbit" released by Disney in mind.
If you're a Disney fan, especially a fan of Oswald, it's normal to dream of Oswald lining up in the LEGO world. Please support this set. And spread this set to your friends, acquaintances, and family! Please.