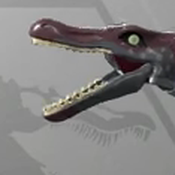 It is a LEGO project based on Shin Godzilla,one of the best films in the franchise.It contains:
.The Second Form(Kamata-Kun)
-barley any joints but a movable head,legs,and tail.
.The Third Form(Shinagawa-Kun)
-movable arms,and a red coloration.
-twice the size of Kamata-Kun,like in the film
.The Fourth Form(Kamakura-San)
-a face in the tail like in the movie
-twice the size of Shinagawa-Kun like in the movie
I built it because I wanted a set based on the franchise.I believe this will make a good set because it sold the most tickets than any other Godzilla movie and is a success to the franchise,so it will also be a good LEGO set.
All rights go to Toho.