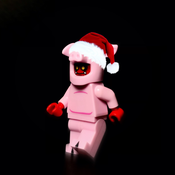 By EpikEpig102
19 comments
This build depicts the house of Sôsuke in Studio Ghibli's movie Ponyo. I built it because I thought it would look cute in Lego and I think it'll make a great set because fans of Studio Ghibli as well as fans of Lego houses and architecture in general will both enjoy it. I think it would be awesome if Lego made a house like this because a lot of awesome details can be added, plus it'll work great as a display piece.
I included the entire house, plus some terrain around it and a full interior with two floors. The outside of the house features a brick path leading up to the front door, a dirt path leading around the house, a nice bendy tree, and lots of flowers and foliage. The first floor has a living room, a kitchen, and a dining room, and the top floor has two beds and some dressers. In the third-to-last picture you'll see a depiction of the scene in the film where Sôsuke talks to his dad out at sea in morse code with a lamp, but you can recreate many other scenes from the movie with the accessories I've built. These include Sôsuke's boat, both little and small, the candle used to power the boat, Ponyo's bowl of ramen noodles, and Sôsuke's ship captain hat. I built Sôsuke, Ponyo, and Lisa, Sôsuke's mom, as minifigures that can go along with the set.
I hope you enjoy the build and can support this project! I had a ton of fun making it.