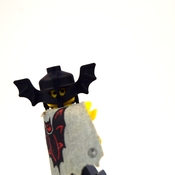 The picture that is posted is the Maelstrom Spider Queen. She is a boss battle from the beloved, short lived MMOG, Lego Universe. The Spider Queen was the first Maelstrom life form to be created according to Lego Universe legend, and now it can be possible to own it along with the iconic, never been made, Lego Universe faction minifigures. With this set you will receive:

NOTE: Bob Minifigure and jetpack is not included. He is just for scale purposes.

The Spider Queen also features a red Brick Light in the back for evil light-up Maelstrom spider eyes. In addition, the Spider Queen has two weapons on either side on the top, along with chainsaws on its legs for debricking those pesky imagination preserving minifigures.

I really hope that this can become a reality. The faction gear, minifigures, and Spider Queen were very unique. It would be amazing to hold in your hands the Maelstrom enemies and minifigures we played as in the Lego Universe game.