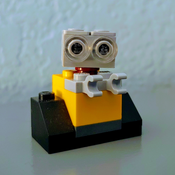 This model of the Atari 5200 SuperSystem (more commonly known as the Atari 5200) looks almost comepletely identical to the original Atari 5200 console. Like the real Atari, the controlers on this Lego version also has a keypad, fire buttons, a joystick (of corse), and pause, start, and reset buttons. The system also includes a power button and a slot to put in the game cartridges just like the real one. This set also comes with four game cartridges that you can put them in the slot on the system. Also, just to let you know, since this is a model, the buttons don't actually work. they're just there for detail and display.

There are also ports on the system that you can plug in the controlers. Some Atari 5200 systems with four controler ports are extremely rare.

The Atari 5200 was a video game console that was introduced  in 1982 by Atari Inc. The Atari 5200 was created to compete with the Intellivision but ended up competing with the ColecoVision more spesificly, and if you compare the two systems, they look very similar. The 5200's internal hardware is almost the same as atari's 8-bit computers, although software isn't diretly compatible between the two systems.