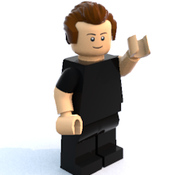 Yu-Gi-Oh! 5D's is an anime that first aired from 2008 to 2011 and that I find fascinating to this day - especially due to its futuristic settings.

The postapocalyptic island of Satellite - full of scrap heaps and heavy industry - and the seemingly utopian, hypermodern Neo Domino City are strictly separated from each other. Yusei Fudo escapes from Satellite and follows his rival Jack Atlas, with whom he has a score to settle, to the City. Here, Jack has become the champion of Riding Duels, a popular and exciting spectator sport that combines motorcycle racing, a card game, and spectacular holographic projections. In Neo Domino City Yusei also comes across Aki Izayoi, a girl with psychic powers; the twins Lua and Luca; and Rex Godwin, the city's not-so-secret ruler. And he learns that they all are part of a millennia-old mystery that involves the Nazca lines, an ancient cult, and legendary dragons.

This 589-piece model in the style of an Architecture Skyline set includes Satellite, the unfinished Daidalos Bridge, the Riding Duel Circuit, Jack Atlas' skyscraper penthouse, the Public Security Maintenance Bureau building, a highway, the Kaiba Corporation headquarters, and additional high-rise buildings in the background. Also includes the Crimson Dragon, the spider geoglyph, and minifigures of Yusei and Jack!