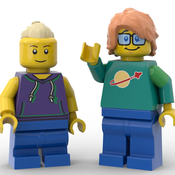 By Brothers Grimm
14 comments
Master Wu and the evil snake sorceress Aspheera meet once again!
This time they are equipped with mighty mechs to boost their powers!
The mechs are meant to mimic their pilots, Wu's mech wearing a golden hat and Aspheera's being a humanoid snake, while they both also get their typical weapons scaled to match the mechs.
The Master Wu Mech is designed after the First Spinjitzu Master's golden mech, translated into the System-CCBS style.
Aspheera's mech is inspired by her unpowered appearance and has an additional feature: it can split up into a mech and snake to double its combat power!
To allow Aspheera to sit in the mech, a custom brick-built lower body is utilised wich features a posable tail that can be detached and used as part of the tail for the large snake while Aspheera is in the mech.
Both pilots can leave their mechs behind and use parts of their giant weapons to build minifig scaled versions to maximise the play and display value.
My brother and I designed this set over the span of multiple weeks, as part of a theoretical wave of Ninjago mechs all featuring a hero battling their biggest enemy. It could be a great way to celebrate Ninjago's history while making sought after minifigures more available.
The background image is a Creative Commons picture by Vyacheslav Argenberg
© Vyacheslav Argenberg / http://www.vascoplanet.com/, CC BY 4.0 https://creativecommons.org/licenses/by/4.0 and can be found under https://commons.wikimedia.org/wiki/File:White_Desert,_Alien_landscape,_Egyp...