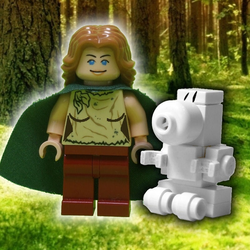 “Ohana means family. Family means no one gets left behind.”

This set is based on the wonderful animated Disney film, Lilo and Stitch. Lilo and Stitch is a movie about a lonely little girl named Lilo who adopts a dog, little knowing that her new pet is in fact a super powered alien with destructive tendencies. Funny, action packed, and full of heart, Lilo and Stitch would be a perfect addition to LEGO!

The main structure of this set is Lilo’s room. I included numerous details in the build, including (but not limited to): Lilo’s photo collection, Stitch’s box bed, and the diorama of San Francisco that Stitch built. The floor is created through Studs Not Only on Top, with studs sticking the furniture down.

Four Minifigures are included: Lilo, Stitch (Stitch is built with 100% official LEGO pieces, with special printing, or a sticker, for his face), Nani, and Cobra Bubbles.

A brick built Jumba Jookiba and Pleakley are included. Both are built with 100% official LEGO bricks. Jumba utilizes the Cave Troll’s arms. Both receive special printing (or stickers) for their distinctive faces.

Accessories include: a surfboard, the Ugly Duckling book, a bottle of coffee, Pleakley’s view master, Lilo’s camera, a plasma gun (with carrot stuck in it), a record player, Cobra Bubbles’ card, and Scrump, Lilo’s beloved doll.

This set would bring the fantastic film Lilo and Stitch to LEGO and allow fans to own and play out their favorite parts of the movie as well as create their own Lilo and Stitch stories. This set has been extremely fun for me to create, and I hope you enjoy it as well. If you want LEGO Lilo and Stitch to become a reality, please support, and leave a comment if you have the time. Thank you so much for viewing!