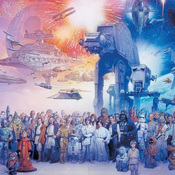 By 10Minaya99
59 comments
Reaching Mars is one of those goals that mankind has decided to set, and it is not long before it becomes a reality. Either in the next few years or in the middle of the twenty-first century, mankind will set foot on the red planet.
It has been the subject of many movies and stories about its inhabitants: the Martians. This is the name that many people use to refer to the aliens. Anyway, someday we will explore Mars and even if we do not find life, it will be a great step for science and for humanity.
That's why I wanted to recreate in a funny and comical way our landing on the red planet.
This set presents a funny scene where our astronaut is surprised by a huge creature just when he gets off his space capsule.
It features a ship with the typical colors of Mars and a minifigure, plus the creature is reddish colors as it mimics the environment to be of this planet.
The set has about 480 LEGO pieces and the scene is recreated on a pedestal that wants to mimic the Martian soil.
This set could be a souvenir of the arrival of man on Mars, being a piece to be exhibited wherever you want. Keeping in mind the future of the space race. Always with a touch of humor and fun typical of LEGO.
Thank you for support!