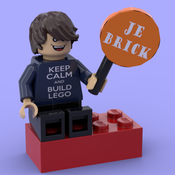 By JE Brick
34 comments
My favorite serie since I was a little kid is Everybody Hates Chris, so I created this lego in honor of it. This serie is about the life of the world famous comedian Chris Rock from 1982 to 1986. He talks about his school problems, like rascim and bad grades, he also talks about his families problems and the neighborhood problem in Bed-Stuy.
The lego is based on all the 88 episodes, so there are a lot of easter eggs. In the basement, we have the key of the city, that Julius won after saving a person, we have the easter hat of Rochelle, the purple bike of chris and the poster "Dj Chrissy Chris".The first floor never appeared on the serie, so I just put some cameras in there for the filming. In the living room we have 2 armchairs, one of Julius and one for Rochelle, we have the foot supporter of Rochelle and we have the stand where we can see a bedside lamp, a telephone and a clock. In the bedroom, there are the bed of Rochelle and Julius, and the stand of Rochelle. In Omar's home, we have his kitchen and the living room, and in the living room we can see his picture of a panter.
Out of the building, we have the drivetruck of julius, where he delivers newspaper.
This lego has 6 minifigures, Julius and Rochelle,The Chis's parents, The friend of Chris, Greg, the brothers of chirs, Drew and Tonya and we have himself, Chris.