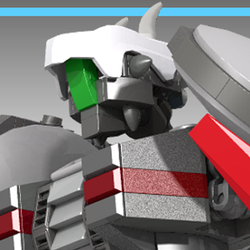 Orion III is a robot inspired by the mecha of the 80s. The pilot controls a flying vehicle called Glider-on which joins the robot body.

In the presentation video the hooking maneuver is shown in an imminent attack situation, then the robot's features are presented.

Orion III is equipped with different weapons, some are part of the body of the mecha, others of Glider-on.

The same tip of the aircraft is used as a rotating halberd. On the wings of Glider-on, the cannons can be replaced with large arms that support iron fists.

Proton rays leave the body of the mecha, to bind the opponent and trap him in a tight, indestructible net.

Orion has extremely flexible joints to reproduce martial arts poses. He uses his cybernetic nunchaku as a master.

To see the presentation video, you can click on the following link:

I also prepared two animations that provide a guide for building the Orion III mecha and its Glider-on pilot vehicle.

The first one to build the robot is visible at the following link:

Glider-on, electronic nunchaku and iron fists can be built with the guide at the following link: