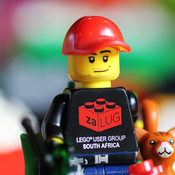 By blazerk
33 comments
The Gutenberg Press started a printing revolution around 1440 and ushered in an era of access to books for the public. Ths build celebrates the history of the press.
The cool thing is that the press operates, with the table able to open and close, slide in under the press and then by turning the press wheel, moves up and down to simulate printing a page. The model and room is an artist's impression and may not be historically accurate, but it still celebrates the invention of the press, responsible for bringing literacy into the modern age.
The room features the press as well as a work table and a movable type table, where metal slugs were kept in cases, where it would be inserted into a printing plate to create a page. It's interesting to note that the term "upper case" and "lower case" originated from these cases, where capital letters were literally kept in the upper case, where small letters were kept in the lower case.
I built the Gutenberg Press as an entry into the zaLUG monthly build challenge, building an interior scene on a 16x16 baseplate. It claimed 1st prize in the competition.
About the Gutenberg Press
According to Wikipedia, in Germany, around 1440, goldsmith Johannes Gutenberg invented the printing press, which started the Printing Revolution. Modelled on the design of existing presses, a single Renaissance printing press could produce up to 3,600 pages per workday, compared to forty by hand-printing and a few by hand-copying. Gutenberg's newly devised hand mould made possible the precise and rapid creation of metal movable type in large quantities. His two inventions, the hand mould and the printing press, together drastically reduced the cost of printing books and other documents in Europe, particularly for shorter print runs.