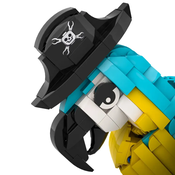 Are you fan of Disneyland and attractions, both ? This project is for you !

Discover and built five authentic  vehicules of Disneyland park. For this project I choose the best of each land, you have differents vehicles which represent the most popular attraction for each land.

Since my childood, I'have mainly two hobbies , lego of course and Disneyland, So I find a way to mix lego and Disneyland theme parc with five details models.

-Jungle cruise steam boat: Jungle cruise is an attraction which situated in Adventureland, this attraction was built as early as 1955 in the first Park in California. Walt Disney want to make people discover tipical African landscapes abord a boat inpirate by African Queen movie. So I recreate the first look of this boat with mainly white and red color. The base inclued also african Landspaces with some plant and a part of the river.

-Autopia car: Situated in Tomorowland Autopia is an attraction which allow to drive his car. Walt Disney said about this attraction allow to people to discover hightway, the futur of transport. So for the car I take the original model of autopia car of type Mark V11. The base inclued a part of Autopia road and also a modern floor lanp and a red light.

-Big Thunder Mountain Railroad: Frontierland is the land which represent epic of the wild west and the most popular of Frontierland attraction is of course Big Thunder Mountain. BTM was built a long time after the other attractions in 1979 in california Disneyland resort but it's now a must of Disney attraction. So I imagine the big thunder mountain locomotive with all details of the original model. The base inclued a part of BTM railroad with rock landspace, cactus and TNT box.

-Peter Pan flight ship: the last but not least, what would disneyland be without Fantasyland and Disney Stories ? So for the most popular land I choose a charismatic and magic attraction: Peter Pan flight ! Imagined by Walt Disney, this attraction allow to people to go to the Neverland passing by Wendy's bedroom and London. So I built a colored flight ship which can contain two minifigures. The base inclued a part of the ride with small London which contain Tower Bridge, Big Ben, the Thames and clouds,

Each pedestal can be connected with the others and exposed in different ways. In Addition each attraction contain a tipical castmember. The global projet contain 1150parts.

Enjoy it for the dream to become reality.