The Solar System and Zodiac Constellations 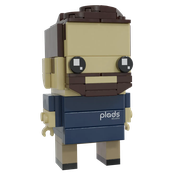 Humans Always looked up to the sky to behold the wonders of space exploration. We are curious by nature and we always push the boundaries of science by defying the obvious. That has given us remarkable achievements, Man on the Moon, a Space Station orbiting Earth, and several many Telescopes and Sattelites exploring the unknown. But when we think of Space and the first thing that comes through our minds are Rockets, Satellites, and Astronauts, we are missing the obvious that are the true wonders of the universe, the Planets, and Stars themselves!
In my designs, I've always tried to explore the beauty of nature, which in my opinion is the greatest of all! So I decided to go a little further and explore the singular delight of our Solar System and its Zodiac Constellations.
First, the not-so-obvious about this design, the constellations. In order to hold together the planets I created a base to support them, and between every gap, there's a print of one of the twelve Zodiac constellations, crafted in a most precise way, as you may check on the pictures for this design. You may Easily spot them on the individual pictures of each Planet. The reason I chose these constellations is that they are easily sequenced in an order which does not necessarily need a spatial positioning of the stars between each constellation. And since these constellations are extremely well known and beloved, they were the best choice for the base display.
The planets were developed considering their own characteristics and colors, giving the Design a closer aspect of reality. Every planet was scaled to a point in which it gives a feeling of size difference however I was unable to scale them properly due to obvious reasons. Earth was developed in the most detailed way to its scale, also it has the moon attached to it, as you may check on the Youtube video for the best resolution!
Also, some cool features such as the rings of Saturn and Uranus were not forgotten. and Last but not least, an Alien's ship was spotted orbiting Jupiter, check it out on its design to see if you may spot it!