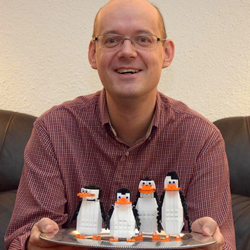 Who does not know the penguins? The popular spinoff from the movie Madagascar, the heroes of Penguins of Madagascar are ready to pursuit adventures on their own in the Central Park Zoo. Skipper, Kowalski, Rico and Private are always ready for some crazy action.

Private is the nicest and smallest of them all. He can move his legs and wings, and of course brings his Lunacorn along to get through the mission.

Kowalski is the brain behind all. When he is not using his computer, he is sketching the next awesome device on his notepad. He can also move his legs and since he is the tallest, he has the most freedom to move his wings too.

Rico always comes up with a brute force way to solve problems. He opens his mouth to get the best item for this plan, in this case a dynamite.

Skipper is the commander of the group. Because he needs to plan ahead, he can turn his head around and also use his binoculars to conquer the next challenge.