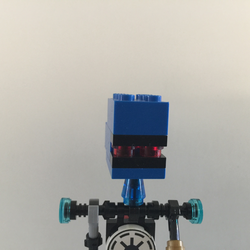 Two Intellegent Astronauts named Charlie and Ellizibeth have finished building a spaceship for galactic defense use. With turrents mounted on the back to shoot from behind, no attacks will be a surprize. The front cannons and spring loaded missles can destroy its targets with no sweat.

The Make-Shift Station is their base of operation and is runned by their android boss R0-DY. The maintenance droids helps carries the duos' tools and supplies.