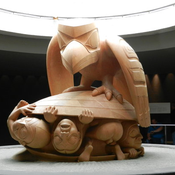 The Centre Block is the main building of the Canadian parliamentary complex on Parliament Hill, in Ottawa, Ontario, containing the House of Commons and Senate chambers, as well as the offices of a number of members of parliament, senators, and senior administration for both legislative houses. It is also the location of several ceremonial spaces, such as the Hall of Honour, the Memorial Chamber, and Confederation Hall.

Built in the Gothic Revival style, the present Centre Block is the building's second iteration. The first was destroyed by fire in 1916; all that remains of the original building is the Library of Parliament, at the rear of the Centre Block. Though construction began immediately after the blaze, sculpting work on the interior continued through the 1970s. One of the most recognizable buildings in Canada, the Centre Block is depicted on the Canadian $10 bill (the Library of Parliament), $20 bill (the Peace Tower), and the $50 bill.