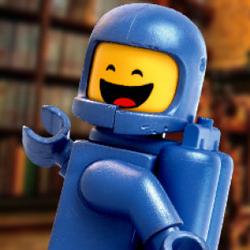 This is a recreation of the house featured in Pee-Wee's Big Adventure. The model was made using Bricklink studio, And it has 950 pieces. It features many of the same details from the film including the fireman pole, The breakfast machine with an animatronic Abraham Lincoln, And many more. It has a secret grassy compartment for the bike and would include two minifigures, Pee-Wee Herman and his rival Francis. I've loved this film for all my life and has inspired me greatly. I think it would make a great set due to Lego loving 80s throwback sets like Back to the future, Ghostbusters, Etc and I think Pee-Wee's Big Adventure would be a great inclusion to that list. Pee-Wee Herman is also a character that millions love and continues to have movies and even Broadway shows. The house's design is also reminiscent of classic Lego houses so even people who aren't fans of the film can enjoy the set. In conclusion, I think a Pee-Wees's Big Adventure set would fit greatly with Lego's other sets, But would also be a great collectors item for Pee-Wee Herman fans.