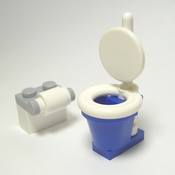 TREADHEAD is a small mech I have been working on. I believe it would be a cool and fun set for people to build. I have focused on trying to give it a lot of detail, while retaining sturdiness and playability. It has points of articulation at the legs, turret, shoulders (cones on the side), and has movable attachments on its arms that can fold into it's sides or be removed entirely. Also, it has a good size/amount of parts to make an affordable set. For all intents and purposes it is finished, but I plan to make more attachments for the arms that could be switched around, and I might add some stuff if I run into some parts that I think would make it stronger or cooler looking. I'm welcome to suggestions though. If it were made as a set, I would want it to include 1-2 mini figs as mechanics who work on the robot, the one in the pictures is just a placeholder. Thanks for checking out my project!