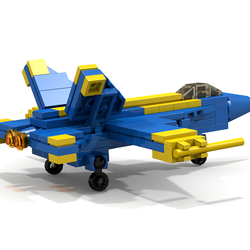 The Blue Angels is the United States Navy's flight demonstration squadron, with aviators from the Navy and Marines. The Blue Angels team was formed in 1946, making it the second oldest formal flying aerobatic team (under the same name) in the world, after the French Patrouille de France formed in 1931.  The Blue Angels' six demonstration pilots fly the F/A-18 Hornet, typically in more than 70 shows at 34 locations throughout the United States each year, where they still employ many of the same practices and techniques used in their aerial displays in 1946. An estimated 11 million spectators view the squadron during air shows each full year. The Blue Angels also visit more than 50,000 people in a standard show season (March through November) in schools and hospitals. Since 1946, the Blue Angels have flown for more than 260 million spectators.

This is an awesome set that allows you to play, display, store and carry around with ease!  There are approximately 900 pieces.

If this were to become a set, I would request the "1% of net sales given to the creator" be donated directly to the Navy Marine-Corps Relief Society.  The CMCRS "helps Sailors, Marines, and their families rebuild, relocate, and recover.  The donation will support families experiencing financial difficulties due to deployments, family emergencies, and other hardships of military life."