Iconic LEGO Computer - An Inside Look 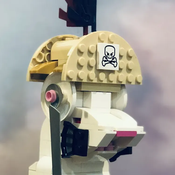 By Brick Hamster
104 comments
Do you ever get a special feeling when looking at a specific LEGO brick? Does the shape of it remind you of creations you spent hours creating? Does a certain minifigure give you waves of nostalgia as you hold it, bringing back the memories of the stories you created and told with it?
As I was holding the classic, unassuming, grey slope brick computer I could remember dozens of amazing spaceships, secret bases, and laboratories that were all controlled by this one brick. It might not look special, but for me, and I'm sure for thousands of other LEGO fans old and young, this brick is something truly remarkable.
I wanted to capture that feeling and turn this little brick into something as big and special as the place it holds in the hearts of thousands of LEGO fans.
This "brick-built brick" is at a 10:1 scale of the original iconic piece. Set on a bookshelf or desk, it makes a statement any collector or LEGO enthusiast would be happy with. It doesn't end there, though. Building on the power of imagination and inspired by the many possibilities this brick holds, it's not just a display piece, but hides a science fiction play set within.
The back of the brick swings open, revealing everything going on inside. Do the outside buttons control what the robots inside are doing? Do they control the computer outside? Is it a secret base designed to look like a giant computer? The possibilities are endless as two robots attend various computers within, along with a powerful looking tube core in the middle of the room. The top can also lift off to give a better view and access to the scene within.
There is one more hidden surprise. Turn the build back around and watch as the front panel of the brick swings open, revealing the design of another iconic space-themed LEGO piece - one of the classic 1x2 tile computer controls. A familiar image to many, and a piece that can be found inside the build as well.
A rough prototype using available bricks was built with physical bricks, and the heft and presence of the piece was found to be extremely satisfying. With that proof of concept in hand, the design was refined, improved, and expanded into the wondrous final product you see presented here.
With great appeal to anyone who grew up with LEGO sets that used this piece, new fans of sci-fi and computers, or those who just want to play with a secret control center inside a giant LEGO brick, this set showcases the imagination and iconic imagery of LEGO in a new way, sure to be appreciated by many of all ages.