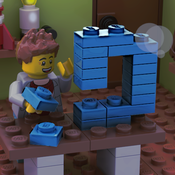 The jungle book is one of the Disney classics that does not have a Lego alternative yet!
Why not make one ?
This cartoon , created in 1967 by Wolfgang Reitherman, tells the story of a little boy, Mowgli, who is abandoned on a boat that is stranded in the jungle.
After several adventures, Mowgli meets a very good friend: Baloo, a very friendly bear !
Baloo decides to protect Mowgli from the terrible snake: Kaa, the terror of the jungle !
There is a real film ( Disney) on this story in 2016.
The set contains :
If this project reach 10.000 supporters, it can become a real set ! So, support it and share it if you like it !
I hope you like it like me !
And you can support my other project : The Samouroïd vs the Hammer