Legend of Zelda Forest Temple, The Ocarina of Time 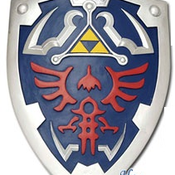 Hello, there! As a reward for getting 50 supporters on my other project (https://ideas.lego.com/projects/71149), I've constructed the Forest Temple, the fourth dungeon in the beloved game Legend of Zelda, the Ocarina of Time. I've tried to make this lego model look as much like the original as possible. I chose a more colorful color scheme to better convey the temple's theme, but, as you can see in the second picture, the model might be a bit more accurate in grays than in sand greens.

This set includes a macro-figure Spear Moblin guarding the front gate. He has an articulated head, arms, legs, and feet. He can hold many things, including but not limited to his trusty spear.

The main attraction is the temple itself, which is one of my smaller temple models. It is made up of three large rooms, two hallways, and the entrance. Up some steps is a thick wooden door leading to the four poe sisters, who levitate two blocks off the ground. Down a hallway (which is guarded by a Ceiling Master) is a Stalfos, waiting to battle you for the bow and arrow. Past one last hallway is the final room: the boss room. This elevated platform is where Ganondorf makes a phantom version of himself and charges at Link on horseback.

The minifigures this set includes are Link (with his Master Sword and the Fairy Bow) and Saria (with the Forest Medallion).

Your goal is to infiltrate the temple, save Saria, and bring her back to the Sacred Realm for safety.

So, there you have it! I hope you enjoy this set and support. Oh, and, if this set gets fifty supporters, I'll introduce the Fire Temple!