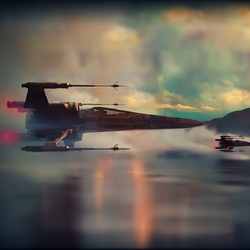 By Frosty Knight9
13 comments
About the model:
The Ice Hawk is my take on what an Ice Bird would look like if it turned into a weaponized race car. It has a dark blue, white, and Icy blue color scheme and a beak and feathers to represent a bird. I built it because a couple years back me and my friends use to build Lego cars and race them outside our apartments in a courtyard and we had so much fun. Then as I entered middle school I moved and I stopped Lego car racing. But recently I decided I would make a cool looking car that is fit to race the courtyard back were I used to live as a memory of all the fun times I had back then Lego racing. I believe this would make a great Lego set because I believe kids would have a fun time playing/racing with it since it is a Lego car that can roll really far and fast and through many terrains as well as they could use it with mini figures to battle other Lego creations and create their own little play scenes like I used to do and still do.
If this becomes a set it would be a special experience to have a Lego set that can be used for many things and it wouldn't just be a set for show but one that kids could interact with other sets or have fun racing through all types of terrains with their favorite Lego characters behind the wheel.
Features:
- Opening cockpit with 2 available seats(driver,navigator)
- has removable engine for fun tune up play scenes.
-has 2 detachable stud shooters , one on each side for weapons in case your characters ever run into trouble.
-has movable flick missile launchers with flick missiles.
-has 2 bumpers at the front so if the car ever crashes then the front won't get destroyed.
-has movable back thruster engine.
-includes 1 mini figure(Cyborg Racer)made from combined character parts.