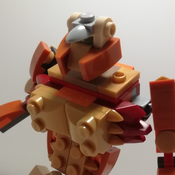 By lego_bricktoys
13 comments
UFO Robot Grendizer, another go nagai masterpiece. This is an anime mecha robot. UFO Robot Grendizer was developed to be a sequel to Great Mazinger after the initial concepts of a sequel were rejected.
Go Nagai however stated in an interview that the anime series was considered a fun side project and does not consider Grendizer to be part of the series timeline.
I decided to build goldrake because I didn't have it in my robot collection yet and I think it can become a great set because when I look at my creation I really like it and I hope you like it too.