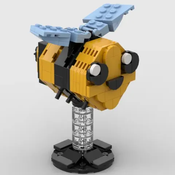 By MasterBepps
36 comments
According to the lore of the game League Of Legends (also known as LOL), the City of the Sun, a megastructure located in the center of the desert of Shurima, is the capital and the greatest symbol of the shuriman empire in Runeterra. Upon the completion of the sun disk, water began to flow in through the structure, bringing life to the desert. Thus, it represents an ancient oasis in such desert, rebuilt after falling into ruins.
For this submission, i used different artworks of the "City of the Sun" as a reference, both official and unofficial, and tried to build something that was a synthesis of them all. Therefore, i consider my work more of an alternate city to the original, a smaller, hypotetical metropolis inspired by the capital previously described and as such it features some differences from the original, like a bulkier look and a reduced disk radius.
The build features two towers, a central city with the great water well on the front and the Emperor's Road in between the towers, the "floating" sundisk (of which i reduced the size compared to the original, mostly for a stability/part usage compromise). One side features a small waterfall and the other a thicker vegetation blocking the flow of water. I tried to give it the looks of a ruined and rebuilt city of the desert using parts of different type and colors, especially for the lower part of the build, which is supposed to have been buried deeper underground for centuries. The magic of the sundisk let the vegetation thrive and the water flow again.
I decided to build this for different reasons. I always loved the lore behind the game and wanted to bring to life something from it that has existed solely in the form of digital artwork. Since i could not find a similar build, i decided to make it myself. Furthermore, i have always built smaller sets, so i decided that this should have been my first large model. Despite a bit of frustration in the beginning, i had a lot of fun building it, albeit through a software.
It is made up of exactly 3000 pieces. Designed and rendered using Bricklink's Studio.
Dimensions (in studs): 64 x 35 x 51.4