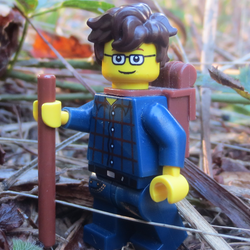 The set would include two mini figures one of Pink Panther and one of the little man. It could also include the pinto pink horse and the little man's dog. Accessories could include paint buckets, brush, a mug, and other things. Inside the house is a bed, bookshelf, fireplace, desk, and some boxes. I disigned this so it could be put on display but still have playability. The Pink Panther is a really great cartoon, and for those of us who like Pink Panther and Lego this would make a really great set.