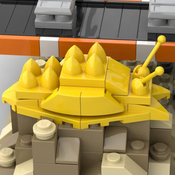 By NerdyLegoist
353 comments
Far away on a distant planet, a single pioneer lands alone amidst an unfriendly, alien landscape. Aided by nothing but a build tool they’ve been tasked with mining resources, setting up automated factories, and either learning to co-exist with the wilderness or to make way for industry.
Now building automated production lines is one thing…but to do it efficiently on a massive scale with resources spread across a vast world requires planning, problem-solving, and the help of some friends. At the same time, architecting the unique, beautiful buildings in which to house them in a way that complements the equally beautiful landscapes requires artistry and creativity. In the end, the pioneer looks around the factory with a sense of ownership as they realize that every machine, every conveyor belt, and every concrete pillar was the result of their hard work.
The game Satisfactory, like LEGO, encourages building, creativity, and problem solving - it’s beautifully crafted to encourage your design and critical thinking skills in ways that other games don’t: without it feeling like “work”. There’s always a new area to explore, a problem to solve in the deserts, a cool building to design in the forests, or giant spiders to avoid in the caves…
The “Constructor” in this ~1530-piece model is the fundamental building block (pun intended) in these world-wide factories. I designed it as a display piece in an attempt to capture the game’s balance between industrial progress and the alien landscape that has captured my heart. The clean, straight lines and tiles on the Constructor are surrounded by the alien terrain and exposed studs of the desert lands while nearby sit some recognizable fauna items from the game, including the “power slug”, a pink paleberry, and the infamous coffee cup.