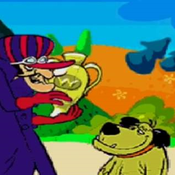 By LazerLuke1
12 comments
"And now here they are! The most daredevil group of daffy drivers to ever whirl their wheels in the Wacky Races! Competing for the title of the World's Wackiest Racer!"
On September 14 in 1968, The world was introduced to the Wacky Races. A short lived Saturday Morning Cartoon that ran from 1968 to 1969. As a kid, I was always a fan of the Wacky Races cartoon and as a huge LEGO builder and collector, I thought this would be a cool set to design as it will appeal to many generations.
Various techniques were used to recreate Dick Dastardly's trademark racing hat and Muttley's iconic hair with ears.
The designing took me three days to complete; From the inspiration to finalizing the design. My favourite part of designing the car was building the rocket boosters. I used references from the model sheet from the original cartoon and added a license plate for extra detail. I added a detailed dashboard for the car enthusiasts and the all important handbrake for the quick drift turns.
The set comes with minifigures of the diabolical duo themselves: Dick Dastardly & Muttley, a TNT Plunger, a crate of TNT, a stick of dynamite (all being classic parts of the cartoon) and a medal.
The set also includes a play feature: Open the engine's trunk by unlocking it via the top racing fin to store some "diabolical" devices for the race!
I really had of fun designing this build. It was like watching the cartoon and building at the same time!
This project needs at least 10,000 supporters to become an official LEGO set. Please share with your friends and family to help make my set idea a reality!