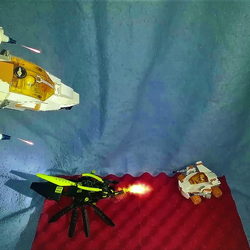 As a kid, I loved to play with Mars Mission legos. Maybe you have similar memories. Thus it is with great pleasure that I present this project.

The model which I constucted has many great and easily playable features. The MX-97 Raider is modular and splits into an attack ship and a battle car. In addition, it has an internal missile bay and several laser blasters. Also, it has two vertical engines which allow it to hover. The two guns on the battle car can be faced forward for more firepower when it is attached to the main ship. The  eight legged Martian Spider tank has one main cannon underneath its body. It also has two fully articulating guns on its sides.

Included in this model:

I hope you enjoyed my model. Please support if you found my model interesting, enjoy its features, or simply are a space enthusiast. Also, please share this on social media. Lastly, If you see any improvements which could be made on the model, let me know in the comments. I will update the model based on these suggestions.