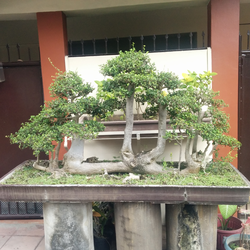 Dalai
2
A Komainu is a lion dog statue which guards shrines in Asian culture. The design I made has a stand that can be taken off. The Komainu itself has leg joints and two ball joints for the tail which makes the figure moveable. It has a large head with 2x2 circular plates (3 on each side) on S.N.O.T bricks to represent the mane. I have limited pieces so the sample has too many colors, but I imagine the final product to be mostly grey with the teeth only in white.
I made it because I saw that I can submit ideas to Lego so I thought of a statue and found a cool guardian lion dog statue picture which I wanted to build. I think it would make a great Lego set because it shows something about the Asian culture and it's a great action figure size model. With the base, the whole thing is 4.5 inches tall. Without the base, the figure stands 3.5 inches high.
2