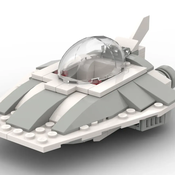 Hi!
I just finished building a LEGO replica of the new Steam console, the Steam Deck. It portrays its main menu screen, two joysticks, arrow buttons and XYAB buttons.
It also includes a mechanism that, by rotating the upper Technic piece, allows the owner to detach the screen and see the Steam Deck interior, with its Valve-AMD SoC, two Samsung LPDDR5 RAM chips, and more.
I think that this would make a great LEGO set because it is relatively small, hence being more affordable, and, in my opinion, it looks pretty good, so it can be exposed in a bookshelf, for example. It also has a high level of detail, which can be interesting for the Steam Deck fans (even the inner components are accurate).
Besides, the screen is detachable, so it would be possible for LEGO to sell cheap aditional screens as an asset for this build. In this prototype I've added a generic screen, to avoid copyright problems.
Thanks for supporting this build!