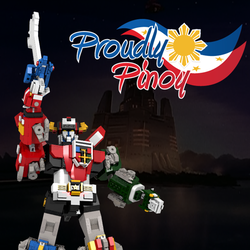 The Dino Megazord was the first Megazord featured in the Power Rangers series. Known as Daizyujin in Japan, it is a combination of five Dinozords: Tyrannosaurus, Pterodactyl, Mastodon, Triceratops, and Saber Tooth Tiger.

Just like the others, I was inspired by the latest reboot of the Mighty Morphin Power Rangers. This set includes the five Dinozords that can be combined to form the Dino Megazord as seen in the TV series

I tried to recreate most of the details using LEGO pieces these includes the "M" on the shoulders, T-Rex chest, Triceratops forehead as well as the graphics on the sides of both Sabre Tooth Tiger and Triceratops.

Roughly between 13 to 14 inches tall, it is currently at 2300+ pieces but may change based on some possible updates.