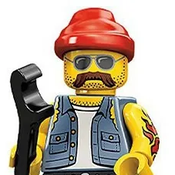 By Ferbrick1
69 comments
In this project I have managed to unite my passion for Lego bricks with other hobbies such as mechanics, models, radio control and Formula 1, resulting in the creation of this F1 Alpine set. This model is based on the Alpine F1 Team car driven by Fernando Alonso at the start of the current world championship. I have chosen this car because it is one of the most beautiful designs of recent years in F1 and I consider that is very attractive visually.
This assembled is made up of a little bit more of 1,550 bricks, grouped into easy-to-assemble sets that form the main parts of the F1, front wing, front axle, floor, cockpit, sidepods, rear group, engine cover, and rear wing.
Its design has been very rewarding and I wanted a set that would continue to be fun once it was built, making it a remote control model trought the Powered Up Hub (88009), controlled by the Powered Up Remote Control (88010) or mobile phone with the Lego Powered Up app.
A Powered Up motor (88013) controls the direction of the F1 and the rotation of the steering wheel, located in the driver's cockpit, simultaneously. The management of the direction has been carried out by means of a rack-and-pinion steering system. The front axle suspension is independent for each wheel, based on the elastic torsion of flexible double connectors. I have opted for this solution because it is compact, which was necessary due to the reduced space in the nose of the F1, also providing the possibility of adjusting the height on the front axle.
The power of the rear group is provided by an XL Powered Up motor (88014), which is transmitted to the wheels through a rear differential gear group. The suspension in the rear group is also independent for each wheel, this time I have opted for springs and dampers located in the lower part of the rear group.