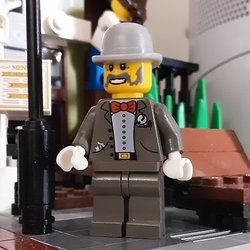 MrSimplex
59
217
days left
This is the Spy Car, a great gadget car for any spy to thwart villainous plots. In a nice light grey colour this car is straight out of the 60's spy craze. Plenty of attention has been given to this car to make it cool and fast.
Why did I build this?
I love the spy movies and shows of the 60's and I've always thought a spy theme would suit Lego. This car features a few design aspects of my previous works and is something I have been wanting to create for a while.
What's in the set?
This spy car is well equipped for fighting the forces of evil. In addition to the car there is a spy sporting a very sleek suit. The car features a few gadgets, these include:
In addition to this the car is designed to look sporty and cool. It has a tan interior and a sleek, aerodynamic body.
Thanks for supporting if you do.
59
217
days left