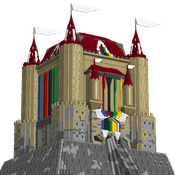 Greetings all and welcome to my first Lego Ideas submission, The Doragon Mech.

The idea came about after experimenting with some pieces and with how much I love the mecha/mecha suits from Japan. I've always been a nut for Lego robots, and decided to make one which gives a new perspective and combinations of parts.

And the result is what you see, the new idea I went for was to make a humanoid Mech with an slight animal prowess to it. And while far from being complex, it gives it the advantage go be easily interpreted.

The Doragon Mech feature a Fully articulated head, arms and legs for maximum possibility. With special knee joints, with wrist, fingers, thigh, double ankle joint and shoulder movements...lots of fun can be had passing it.

-By proposing this idea, I hope to show the creativity of Lego, a new knee joint method, and using of certain pieces for detail (such the horns/claws on the back) so that others may be inspired.