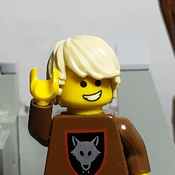 The Wolpack Waterfall Outpost
This is one of many hideouts for the infamous rebel group: The Wolfpack. With its main entrance being hidden behind one of the waterfalls, the Wolfpack has been able to capture King Richard of the Royal Knights!
Key Features:
I always felt the Wolfpack were amazing and needed a larger hideout - even if they're more of a guerilla-style group. Thinking along the lines of Robin Hood, this outpost needed to be at least partially concealed.  This need inspired the waterfall entrance, the large amount of rock walls, and the many tight corridors/chokeholds to favor fighting in smaller numbers.
I feel this set keeps true to the idea of the Wolfpack using their dark gray/black with red highlights color scheme.  This outpost keeps the scale of the group in mind. I feel The Wolfpack were never massive in number, but  functioned like a large pack of wolves. It may be mentioned but these Wolfpack members are armed to the teeth with more than 3 weapons per minifigure!
Without any current Castle theme in production, I feel the viability for a successful Castle based IDEAS set goes way up!
Thank you so much for reading all of this. I hope you like the idea as much as I do!
This was made from real pieces and I'm almost positive on the piece count of 717. All photos were made with a samsung S9 using the "Cream" filter, 2 tri-fold project boards, a flashlight and some legos to hold the camera in place :D