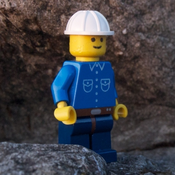 KITT, the self-aware, robotic, talking car from the classic original TV series: Knight Rider has presented a Lego design challenge ever since the 1980s. In recent years, some great new Lego elements have been introduced which allow KITT to be constructed more realistically at minifig scale than was possible back when the show originally aired.

As amazing as he was, KITT (voiced by William Daniels) was not the only star of Knight Rider. Michael Knight (David Hasselhoff), Bonnie Barstow (Patricia McPherson), and Devon Miles (Edward Mulhare) have also been constructed out of existing Lego elements, but it would be exciting to see new printed elements produced specifically for these great characters. KITT, as you see him here, has some proposed printed elements which include wheels, his famous digital dashboard, and a license plate which reads "KNIGHT." His scanner is backlit by the red LED light brick from set 31038.

Of course, KITT just scratches the surface of Knight Rider. KARR, the FLAG Mobile Unit semi truck, and Goliath are just a few of the many other great vehicles from the TV series that await legofication. More pictures will be posted to my flickr photostream. Please vote for this to be produced as an official Lego set and check out my other ideas including the Mini Unimog. Thanks for your support!