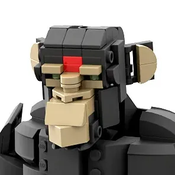 By Afterworkbricks
19 comments
Hi Guys,
I am a big fan of Humanoid Robots. This time, I've built the ASIMO (Full name: Advanced Step In Innovative Mobility). It is an advanced robot created by Honda back in 2000. Honda has developed a few more generations of ASIMO since 2000 to 2018. The overall appearance of the robot remains the same, but with a lot of technology upgrades internally. The latest version ASIMO can stay operative for 1 hour.
ASIMO has the ability to sense moving objects, different gestures, postures, sound as well as human faces. These super high-tech abilities enable it to interact with human beings. It can run, jump with a single leg, shoot a football and dance with music. Also, you will be amazed by its self-balancing ability as well as the precision of work of its fingers. ASIMO can analyze the object it's holding and determine the suitable degree of forces it should apply on the object by its fingers in order to accomplish the task. A very famous demonstration performed by ASIMO was that it could open the cap of a bottle and accurately pour the liquid into a cup, just like a human.
I've put a lot of effort to allow this ASIMO figure to resemble the movements of the real ASIMO robot. I had applied quite a lot of technics bricks in this project. Those many pins with frictional ridges used at the joints enable the 319g weight figure to stay in playful postures. There are a lot of degrees of movement freedom in this figure (neck, arms, wrists, fingers, shoulders, waist, hips, legs, knees and ankles, etc.). (Part count: 566 pcs)﻿﻿﻿﻿﻿﻿﻿﻿﻿﻿﻿.