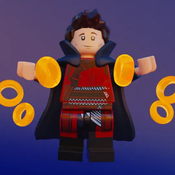 By meerkat2009
38 comments
"Sauron was diminished, but not destroyed. His Ring was lost, but not unmade. The Dark Tower was broken, but its foundations were not removed; for they were with the power of the Ring, and while it remains they will endure."
Barad-dûr was the fortress of Sauron, it was held together by dark magic and was the greatest fortress in Middle-Earth. Barad-dûr fell under siege for seven years by the Last Alliance of Elves and Men during the Second Age, and was leveled after Sauron's defeat.
This set contains 615 pieces and 3 minifigures: Gil-galad, Frodo Baggins, and Samwise Gamgee.