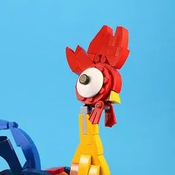 By bibi7542
6 comments
Sparta is an ancient Greek city in the Peloponnese located on the Eurotas, in the Laconia plain, between Taygetos and Parnon, it is one of the most powerful cities of ancient Greece, along with Athens and Thebes. Its formidable, over-trained warriors make it a formidable adversary in wars.
I built these brick Heads because I like ancient Greece and its history, its spectacular wars and its very interesting culture, like the architecture of the Parthenon ....
This project could be part of a Brick Heads series telling the whole story, such as the Vikings, the Romans ...